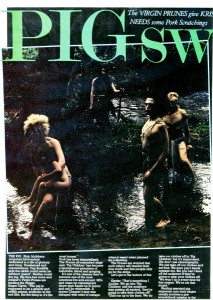 ‘The Virgin Prunes give Kris Needs some pork scratchings’ in this interview from Flexipop magazine (issue 29, 1982)

Gavin: “The pig is supposed to be a greedy and selfish animal, symbolic of dirt and filth. But the thing is, it’s the most honest.”

A German tour was pulled out “because they thought we killed pigs. But we just play with them. We don’t do it all the time. That’s just one level.” The Prunes find it very hard to get gigs because of these blown-up scandals. This hasn’t been helped by the safe press and the fact that their first major UK gig at the Futurama Festival ended in a near-riot. After a bit of feuding with headliners Simple Minds the plugs were pulled so the Prunes just squatted and stared at the crowd for 20 minutes. It made an impression and showed they weren’t gonna be pushed around. But since then things have been difficult. They claim the venue won’t give them a re-booking even though they went down a storm “because people didn’t drink and left when we’d finished.”
[…]
The sleeve of the Prunes’ new Rough Trade album, ‘If I Die, I Die’, is a similarly startling affair – all woods, flames, loincloths, nipples and nature. Words like ‘pagan’ are an easy trap, but the feel is undeniably ancient. Gavin: “The feel is ethnic. I like tribal drums. You don’t have to be like that, but the voice is important and we sing in an ethnic way. But we don’t like it to be like a ‘Quest for fire’. The album sleeve is supposed to be representative of the band. One side is reality – we use fire, fighting against it. The other side is earthy and spiritual – no clothes on in a forest. It’s the other side of us as people.”