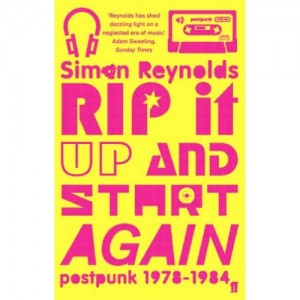 In “Rip it up and start again” Simon Reynold’s book on post-punk music (78-84), the author writes the following on the Virgin Prunes in the chapter “Dark Things: Goth and the return of rock”:

‘Release the Bats’ was produced by Nick Launay, who had worked on PiL’s tribal-sounding ‘Flowers of Romance’ and later produced another Goth dance-floor smash: ‘Pagan Lovesong’ by Dublin’s The Virgin Prunes. The Prines started out as Bowie boys stranded in the Republic of Ireland, then became obsessed with post-punk and regularly made pilgrimages by ferry to Liverpool to pick up the latest records and see favourite bands such as Wire and Cabaret Voltaire. But their Bowie-fan cover surfaced in their ‘glam savage’ appearance – a poke in the eye to staid Dublin folk. Dressed in a skirt and make-up, singer Gavin Friday would saunter provocatively down Grafton Street, Dublin’s upmarket shopping area. ‘But we weren’t Boy George types,’ he says. ‘I looked more like Rasputin. I loved the idea of walking down the road and you wouldn’t know if I was going to kick you or kiss you.’ Live, the Prunes were closer to primitivist performance art than a rock band. At Futurama in 1980, they wore loincloths with pigs’ heads attached to their crotches: the first part of their set consisted of a long period of silence interrupted occasionally by a big pole being banged on stage. Touring Europe as support to The Birthday Party, they simulated oral sex on stage.

The most Gothic element of The Virgin Prunes drew on their Irish experience: the friction between Catholic repression and Celtic pagan spirituality. ‘The Virgin Prunes were one of the few people at that time who had the guts to say, “Fuck the Catholic Church”,’ says Friday. ‘At the same time I liked a lot of religious imagery. And if religions were bands, Roman Catholicism would have the best show in the world, ‘cos it’s got that element of ceremony.’ The Virgin Prunes invoked a primordial sublime, ‘a terrible beauty’. And their keening vocals drew on ‘this old Irish way of singing called Sean nós, basically the blues goes Celtic,’ says Friday. ‘It was a real subliminal thing we had in our music. You can also hear it in John Lydon, in Sinead O’Connor, in country music.’ The Virgin Prunes were also into ‘primeval stuff’ – violent and abstract vocal-noise improvisation not so far from Yoko Ono, but actually inspired by eavesdropping on the occupants of a home for mentally retarded adults.

Friday shrugs off the Goth tag, preferring to align The Virgin Prunes with the post-punk vanguard. In addition to guitar-based songs, they had a nice line in eerie ambient collages constructed from tape loops. Their ‘New Form of Beauty’ project began as a series of EPs for Rough Trade and culminated in the Prunes taking over a Dublin art gallery for a Vienna Aktionist-style installation whose highlights included ‘an abortion piece done with a vagina of meat’ and a table around which fresh turds and piss had been deposited by each member of the group. ‘I turned up the heating, so the smell was outrageous,’ giggles Friday. Still, he concedes that Prunes fans included a hefty Goth contingent. ‘Because or our Bowie-esque sense of image and visuality, we did attract the white faces.’

Buy this book from Amazon.com

Book description
Punk’s raw power rejuvenated rock, but by the summer of 1977 the movement had become a parody of itself. RIP IT UP AND START AGAIN is a celebration of what happened next: post-punk bands like PiL, Joy Division, Talking Heads, The Fall and The Human League who dedicated themselves to fulfilling punk’s unfinished musical revolution. The post-punk groups were fervent modernists. Experimenting with electronics and machine rhythm or adapting ideas from dub reggae and disco, they were totally confident they could invent a whole new future for music.

About the Author
Simon Reynolds is the author of Energy Flash: A Journey through Rave Music and Dance Culture, Blissed Out: The Raptures of Rock, The Sex Revolts: Gender, Rebellions and Rock and Roll (co-written with Joy Press), Rip it Up and Start Again: Postpunk 1978 – 1984 and, most recently, Bring the Noise: Twenty Years of Hip Hop and Hip Rock.