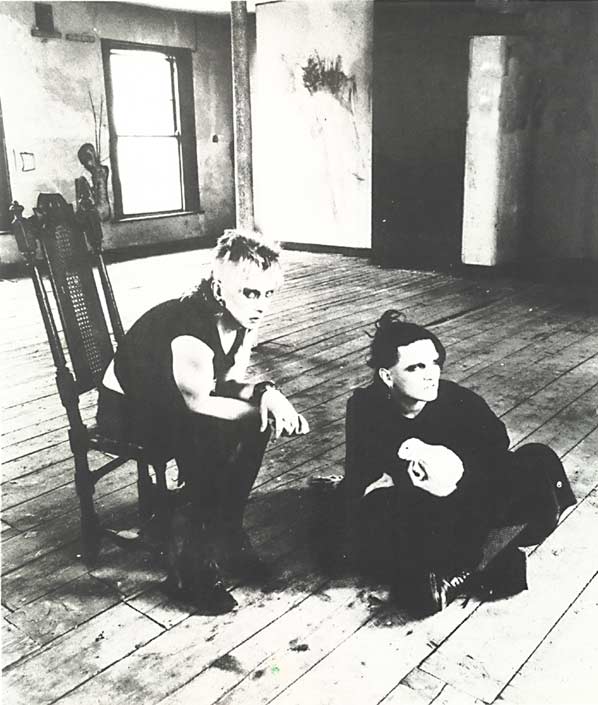 Members of the Virgin Prunes and U2 grew up in Dublin together. As teenagers, they formed a society called the Lypton Village – a group of like-minded people united in their unease at the conventions of contemporary suburban life. Members were given Village names – Gavin Friday, Guggi, Pod, Bono Vox, The Edge – to represent their “true” character.

Around 1977, two bands emerged from the general vibe of the Lypton Village. One went through several name changes (The Hype, Feedback) before settling on U2. The other named itself the Virgin Prunes. The two bands played together on several occasions. Gavin and Bono wrote different songs with the same titles (Boy/Girl and Exit being two examples).

In terms of musical, lyrical and philosophical approach, however, the two bands were about as far apart as could be. They deliberately opted for a Bowie/Iggy relationship, with one band aiming for commercial acceptance and the other aiming to shock and alienate their audience. The relationship was thus more than that of two bands whose members had grown up together. It’s almost as though U2 and the Virgin Prunes were two sides of the same coin, with the coin itself (or “meta-group”, if you’d like a more intellectual and less laboured comparison) being the Lypton Village.

Since the Virgin Prunes disbanded in 1986, Gavin Friday and Bono have worked together on projects such as the soundtrack to the film In the Name of the Father and the Irish Hospice Foundation’s Peter and the Wolf. Gavin has also provided backing vocals on U2’s cover of Satellite of Love and has been credited on most recent U2 albums and tours. The connections keep resurfacing – even Maurice “The Man” Seezer, Gavin’s early collaborator, is related to the Rowans on his grandfather’s side.