Irish music magazine State.ie talks to Gavin Friday about the Virgin Prunes. The full article, ‘When art and anarchy collide’ is available online.

“The second gig we ever did was just me and Guggi, with U2 are our band, when they were The Hype. I worked in a slaughterhouse and I got a load of white coats and mesh which we used to cover them up. We did a 20-minute version of ‘(I can’t get no) Satisfaction’, slowed right down so that it would take a minute and a half to get one sentence out. It was totally provocative. After that gig, Dik Evans left The Hype and came to work with us.”

(On supporting the Clash at The Top Hat in Dun Laoghaire, October 1978)
“We came on: Guggi was wearing a tiny skirt and I had a plastic suit made out of raincoats, no jocks underneath, and pair of Docs. We’d only played two little gigs before that. Steve Averill from The Radiators From Space played synthesizer with us. The crowd just went apeshit. They thought Guggi was a chick.
The adrenaline of all these people pogoing kicked in and I started jumping around, the next thing this plastic suit that me ma had made me split completely. I was standing there totally bollock naked, except for a pair of Doc Martins. I turned around and Guggi’s skirt had come off and you could see that he was a bloke. All hell broke loose, there were bottles flying, they were setting the curtains on fire. We were reefed off the stage by The Clash’s tour manager and fucked out the door. We had no money and had to walk with all out gear, back from Dun Laoghaire to Ballymun.”

“The name Virgin Prunes had been hanging around for a while, since the early 70s. You’d see odd people walking around and we’d call them prunes. Virgin Prunes were quite innocent. We always said if we ever had a band, we’d be called that. The name was there.”

“Guggi painted, I painted; one of the few things I was good at was art. We were always called pretentious pricks simply because we were into the avant garde. I remember when we were 16, it used to be a big deal to come into town and hang out at McDonald’s. One day we walked in and saw the performance artist Nigel Wolf naked with paint all over him and a huge stream coming off his mickey pulling these rocks. We were going “What the fuck was that?”

“Rough Trade’s Geoff Tracis said it was time we made an album, but we said no. He said it was time we worked with a producer, we said no. We told him that we wanted to do a 7″, 10″, 12″, cassette, do a gig, release a film and publish a book. This was 1981 and we had no money. We almost did it. We have the film but it was never released and the book never happened, but we did it. We released something on the first of each month: it was quite a strategy.”

“They gave us 10,000 pounds for an overal budget for the album – producers, studio, everything. We went out and spent 6000 on photographs and they went fucking insane. We were saying ‘But it’s really important.'” 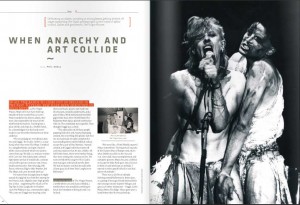 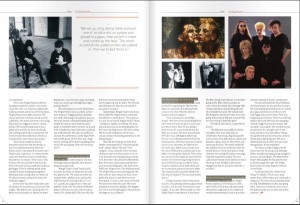