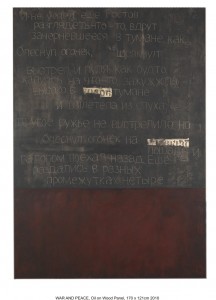 Yoshii Gallery is pleased to announce an exhibition of 22 works, including paintings, drawings and sculptures, by Dublin-based artist Guggi. This will be Guggi’s first solo exhibition with Yoshii Gallery.

Guggi’s work, informal and abstract, creates a deceptive simplicity that emphasizes its stillness and meditative presence. Inspired by common everyday objects from his childhood, the artist continually revisits familiar forms in a manner that is less deliberately iconic than it is intimately contemplative. The depiction of these usual forms, such as bowls and water pitchers, represents not only a steady evolution in the artist’s practice but, at times, sub-conscious musings through engrained visual memories.

In his new work, Guggi has been inspired by the visual form of Russian language and most particularly, by Russian numbers. His meditative and ethereal compositions are softly mysterious, but as the artist claims, they are not meant to be “cryptic puzzles.” Instead Guggi is fascinated by the idea of counting and accountancy, and dismantling the contextual relevancy of unquestioned order in exchange for something more visually poetic. Going further, he applies the same curiosity to his newest paintings on wooden panel, some of which take entire passages from Tolstoy’s War and Peace as compositional content.

Guggi was born in Dublin in 1959. Growing up as the second eldest of ten children, he never formally attended art school but remained an avid painter and draftsmen throughout his childhood. In 1976, Guggi and his friend Gavin Friday founded the legendary avant-garde cult band, Virgin Prunes, notorious for their art-infused performances in the European underground scene. Guggi left the band in 1984 to concentrate on painting full-time, and has since evolved into one of Ireland’s most admired artists and an important cultural icon.

A fully-illustrated catalogue will accompany the exhibition, featuring an essay by artist Sean Scully and a transcribed conversation between Guggi and his childhood friend, U2’s lead vocalist Bono. This rare interchange delves into the remarkable forty-six year friendship between the two artists, providing insight on their extraordinary artistic beginnings in working class Dublin in the 1960/70s and the evolution of their respective careers.