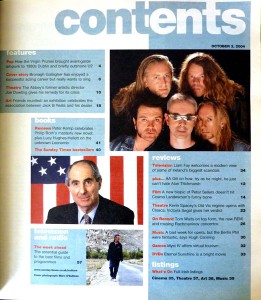 Two-page article and interview with Gavin, Dik and Dave-id by Michael Ross. From The SundayTimes Culture supplement, October 3, 2004.

“Long before they had a band, they had a name for it, which referred to the people who attended a nearby facility for the mentally handicapped. Fionan Hanvey and Derek Rowan watched them come and go, eventually coining a nickname for them: the Virgin Prunes. They had ample time on their hands for such things. Growing up on Cedarwood Road in Ballymun, for a time a frontier of Dublin’s post-war suburban expansion, they had little interest in the pursuits of their teenage peers. Instead they developed a nascent interest in art and music with a handful of friends including Paul Hewson, who lived across Cedarwood Road from Rowen. […] ‘The Lypton Village myth has become exaggerated,’ says Gavin Friday, ‘It was a gang, like any gang of 13- or 14-year-olds with an interest in something other than football. We didn’t want to stand around at the shops, drink cider and play football. We wanted more from our lives.'”