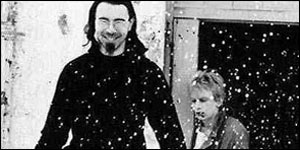 One of the web’s best music sites, Stylus Magazine, sadly shut up shop a few weeks ago. Clicking randomly through its archives, our attention was grabbed by the unexpected sight of a picture of Dik and Guggi.

The site published England Fades Away: Stylus Magazine’s Guide To Goth in August of 2006. It’s a lengthy, detailed and fascinating look at the history of the Goth music scene, covering the extent of the many diverse bands often lumped together under this single banner.
The article pays its respects to Virgin Prunes (“always more a case of fitting in with Goth by virtue of not fitting in anywhere else”) and provides favourable reviews of both …If I Die, I Die and The Moon Looked Down And Laughed alongside numerous other period favourites.
While we couldn’t possibly endorse the writer’s view that Uncle Arthur’s Lonely World and Deadly Sins are in any way sub-standard (and for the record, Ballad Of The Man is sung by Dave-id, not Guggi), in all other respects this guide is a very worthy read if you have the time to spare:

“The Virgin Prunes’ first 7” “Twenty Tens” was sheer springy lunacy, the New Form of Beauty and Heresie releases decidedly more experimental, in both sound and packaging. As such, The Virgin Prunes were always more a case of fitting in with Goth by virtue of not fitting in anywhere else. By the time of their debut album proper in ’82, they were playing it straight enough and Goth was playing it odd enough that the Prunes could ratchet up not one nightclub smash, but two. Rhythmic pounding, Celtic chants, the war dance of the pagan sex fiend, onstage simulated oral action, the murkiest permutations of outsider art and strange rumblings from the underworld. What a strange and beautiful place the early Goth scene was at times…

Peddling a mix of cabaret, performance art shock tactics, sexual deviancy, and Baudelaire, the Virgin Prunes were never going to be mainstream or even indie heroes (though one of their number was in an early incarnation of U2! Ghastly!). But the Prunes were at least guilty of wearing their hearts on their sleeves—their rarities collection is, after all, called artfuck—and making no bones about their outrageous intent to meld music and theater.

But all things must come to an end, even carnivalesque road shows aiming to shock and delight the listless world, even stridently non-commercial collectives performing their shrilly-voiced, almost oppressively-percussive meld of post-punk thunder and Weimar dress-up whilst wearing frocks and cavorting about with dead animals. See them in their unhinged prime performing the mantralike “Caucasian Walk” here. Gavin Friday has since moved towards a slightly more conventional career, in keeping with his strong attachment to all things loony and croon-y. God bless the Virgin Prunes. I doubt anyone else will.”