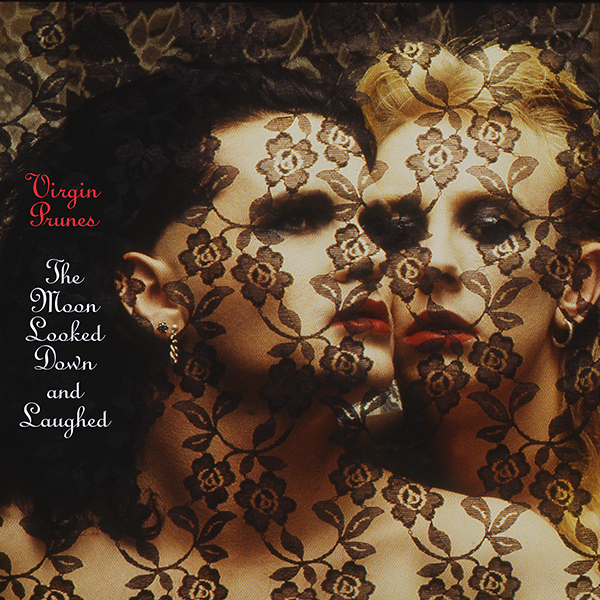 ‘Heaven, such a nice place…’ begins Gavin Friday in the Virgin Prunes’ brilliant fifth album – and the band’s swansong – The Moon Looked Down and Laughed (1986). It contains ten tracks and was produced by Soft Cells’ Dave Ball and recorded by Flood. It witnesses a turn from the Virgin Prunes’ earlier experimentation and improvisation, to more rhythmical, stylized and textured polyphonies and more narrativized lyrics.

The Virgin Prunes had toured widely across Europe in the mid-1980s and Friday had been exposed to all types of music, including the chansons of Jacques Brel, Edith Piaf and Charles Aznavour, as well as cabaret and Bertolt Brecht. This album gave him the opportunity to explore these interests, as he sings and snarls his way through tales of romance, love lost, betrayal, broken relationships, melancholy and guilt – with a sequence of extraordinary, black jewel encrusted lyrics. The album includes magical tracks such as ‘Love Lasts Forever’, ‘I Am God’, ‘Sons Find Devils’, ‘Alone’, ‘The Moon Looked Down and Laughed’ and ‘Betrayal’. The angry lament ‘Don’t Look Back’ (which might also bring to mind the horror film ‘Don’t Look Now’) ends with the powerfully simple line: ‘With you I could change the world, but you don’t see the world with eyes that see the world like me.’

The Moon Looked Down and Laughed has a different self-consciousness to their previous albums, a new musical choreography and theatricality. It also contains a sense of humour that only came out to play occasionally on previous albums. Tragedy, however, is never far away from comedy with the Virgin Prunes. ‘Uncle Arthur’s Lonely World’, a beautifully plodding melody with accompanying story-line by Dave-Id (who always had a magpie-like ability to work with pre-existing lyrics), is the Virgin Prunes’ ‘Eleanor Rigby.’ For all the sadness it contains, we might also see a tongue in its cheek. Uncle Arthur ‘Never had a television. Never had a radio. Never saw Dracula. Never saw Frankenstein…I don’t know what the world is coming to.’ The moon looked down and laughed, after all. The art work for this last Virgin Prunes album was created by Steve Averill who had designed a number of their previous albums.