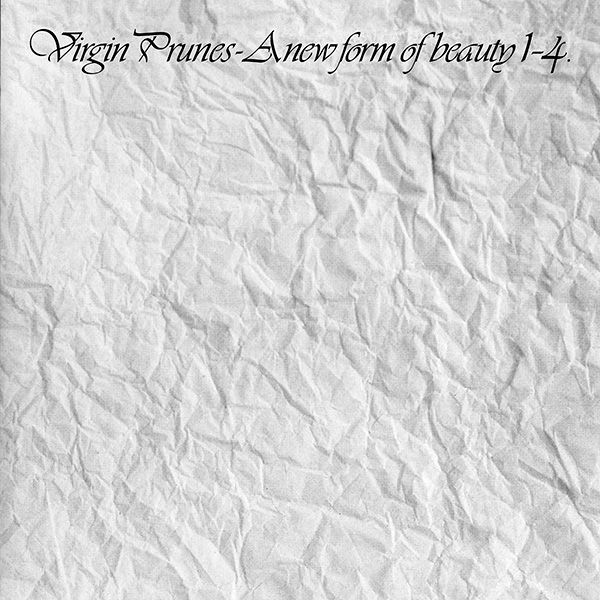 The Virgin Prunes were masters of the uncanny, juxtaposing nightmares with lullabies, beauty with cruelty, combining gentle vocals and the spoken word with anguished wailing from purgatory itself. This first album powerfully laid out this terrain. Its themes ranged from mournful tales of unrequited love, frustrated sexuality, morbid eroticism and wasted youth, to yearnings for distant dreamlands which were juxtaposed with macabre visions of dystopian societies, overpowered by dark forces and where demons run amok. Guggi’s art work for A New Form of Beauty, which intimates a heartless transaction within a domestic setting, is in keeping with this sensibility.

The album begins with ‘Sandpaper Lullabye’, a la-la-la love song of child-like innocence that leaves a bitter aftertaste. What follows is a series of powerful hymns to desperation and revolt. ‘Come to Daddy’, in which Gavin and Guggi sing in dialogue while improvising, is a relentless soul scream, which ends with the ironic lines ‘Oh we are, we are so young. Oh, we have so much to look forward to.’ This is soon followed by one of the band’s most celebrated songs, the elegiac ‘Sweethome Under White Clouds’, and later on by ‘Beast’, one of their most brutal and notorious.

The Virgin Prunes’ A New Form of Beauty (1981) was recorded and produced by the band itself. It includes the tracks of the first four parts of what was a five-part, mixed-format project with Rough Trade Records. Part 1 was a 7” record, Part 2 was a 10”, Part 3 was a 12”: these were recorded between July and October 1981. Part 4 was ‘Din Glorious’, released as an audio cassette, was a recording of extracts of a live event on 8th November 1981 at the Douglas Hyde Gallery in Dublin. Part 5 was to be a film of ‘Performance, Exhibition, Event’ staged at the Douglas Hyde Gallery on 7th and 8th November 1981.